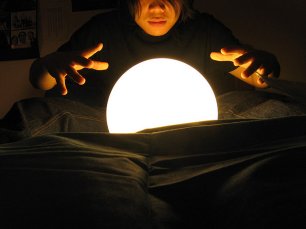 It’s January, and everybody’s got opinions about what’s in store in the year ahead.

The same is true for us who are involved in intranets, the digital workplace, Enterprise 2.0 and related fields. But instead of muddling the scene with our own predictions, we decided to look at what others see in their crystal ball.

Paul Miller, the founder Digital Workplace Group, identifies trends rather than predictions for 2013. Among them, he sees the gap between early adopters and laggards will become a chasm. He also thinks physical workplaces will become important again, now that we’ve seen and experienced the “digital divide.” Another exciting trend Miller foresees is the rise of digital innovations in manufacturing rather than knowledge workers.

2013 Predictions: The Digital Business of the Future

Oscar Berg’s predictions are quite dire. He says the threat of recession will put IT initiatives such as collaboration on hold. Changes in digital business will make the CIO and IT department less relevant. Companies will turn to external consultants, he says, rather than IT department.

Based on a study by Forrester, it’s apparent that companies will continue to seek enterprise 2.0 tools in 2013. Despite limited resources and a bountiful array of free options, companies will increase spending.

The benefits of social tools in business — improved communication, collaboration and productivity — will remain as important as ever. Companies will keep looking for and using tools promising these fruits. Budgets, however, will be a challenge. Finally, the roles of people and departments involved in managing these tools will change, some for better, some for worse.

In 12 months, we’ll look back and see how accurately these soothsayers looked into the future.

What are your expectations for 2013?

Vialect has been helping companies to connect people, content and capabilities for over a decade. Noodle is an All-in-One Intranet Software platform that provides office staff & remote teams the ability to post ideas, create content, share schedules & have video calls all within a single secure site. On Premise and Cloud hosting available.