The never-ending problem for intranets is getting staff to actually use them.

In this recent article, Angela Ashenden, Principal Analyst at MWD Advisors, analyzes why no one uses the company intranet.

Ashenden attributes low intranet user adoption primarily to outdated publishing models, where a handful of authors create the intranet content. Each piece of content must go through hoops before finally getting approved and published. By this time, the content is probably outdated and irrelevant. And readers are unable to respond to the content, if they find it at all.

According to Ashenden, bringing social technologies into the intranet is the “light at the end of the tunnel.” Social turns intranet publishing upside down. Where authorship was limited, it is now democratized and open to more, or all, staff. Where publishing took time and effort, it can now happen in real time, as something important happens, or when the information is needed.

Perhaps most importantly, intranet users can respond to the content. This feedback allows the intranet to evolve into an environment that’s truly relevant and useful.

Ashenden used this diagram to show the contrast between traditional intranets and social intranets: 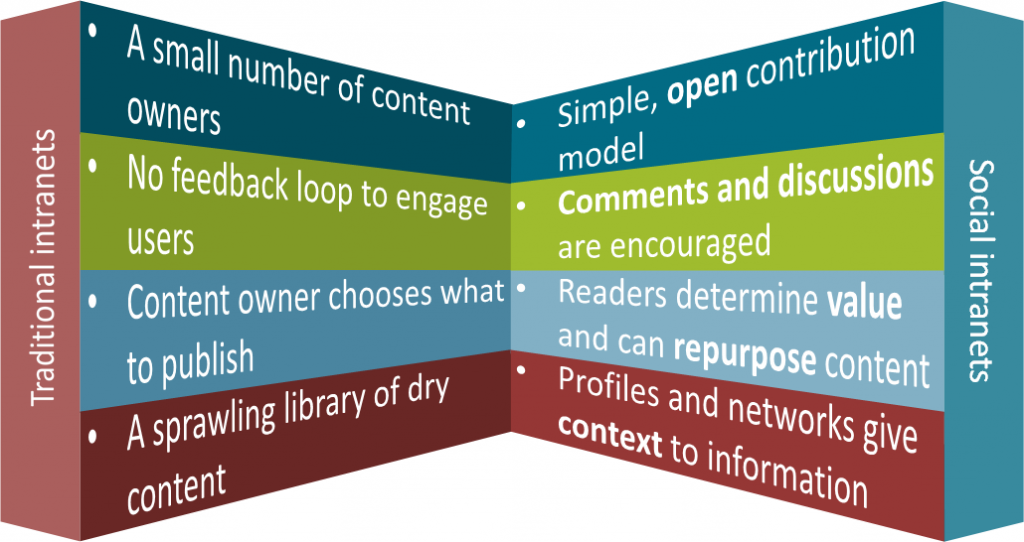 Ashenden concludes that this is “the beginning of the end for the traditional intranet.”

Social intranets have been around for at least a decade. (CMSWire says 2002 was the year experts realized social technology was becoming significant, although not necessarily in the enterprise)

And social intranets are here to stay. Companies demand them. Dozens of vendors offer them.

While we agree that social features tend to make employees more interested in the intranet (as we mention in our video below), it’s not enough to go social.

Even in social intranets, user adoption can continue to be a problem.

What I’ve heard from prospects and intranet consultants alike is that one of the reasons for low adoption is complexity.

Some social intranet solutions are simply too complicated to use. Yes, they have many features. They can be like Facebook, Twitter, and Skype all rolled into one. They can do most everything except make you a cup of coffee. But they’re beastly to actually use.

In this day and age, who has time to master a new software yet again?

It’s not enough for intranets to be social; they also need to be intuitive and easy to use.

In this light, here are our 3 no-fail ways to get staff to actually use your already social intranet: