Are you one of those people who shake your head at the thought of sharing status updates with co-workers, and think, “What will these people think of next?”

It turns out these seemingly trivial snippets from your co-workers are actually good for you and your company.

It’s all because of a phenomenon called “ambient awareness.”

What Is Ambient Awareness?

Ambient awareness is a sense of connection and knowing about other people without being physically together. It’s the result of having constant contact through social media. It’s a kind of “omnipresent awareness” of what’s going on in other people’s lives. Taken singly, these individual status updates mean nothing. But they form a comprehensive picture of a person’s life.

When it comes to our interpersonal relationships, ambient awareness has several benefits.

Strangers no longer seem like strangers, even if you’ve never met each other in person. And when you do meet in person, your conversation is fed by ambient awareness. You no longer have to ask, “How’ve you been?” because you know. Instead, you can plunge into deeper conversation about something the other person posted about recently.

Importance in the Enterprise

Even in a business context, ambient awareness may have its uses.

The most obvious one, of course, is enhancing interpersonal relationships at work. With ambient awareness, we feel like we know our co-workers better. This is particularly important in organizations with a geographically dispersed work force. Sharon Odea says ambient awareness leads to more empathy and trust in the workplace.

But aside than enhancing relationships, ambient awareness can improve 3Cs: collaboration, cooperation and coordination. It can “surface opportunities (emergence), have the best people on the right tasks, and generally have the ability to be more responsive and adaptive.”

One term used to describe this situation is “networked productivity.” Generally, when people are on the same page about a project or goal, and feel good about working together, then higher productivity can be expected. Odea also noted that ambient awareness leads to be better understanding of what the organization is doing. This contributes to productivity as well.

How to Use the Intranet to Promote Ambient Awareness

To achieve ambient awareness in the workplace, you need a social intranet with an activity stream. Noodle intranet, for example, has a status update feature which creates an activity stream. The default question is “What are you working on?” However, as you can see, this stream quickly turns into a sharing of personal updates as well. 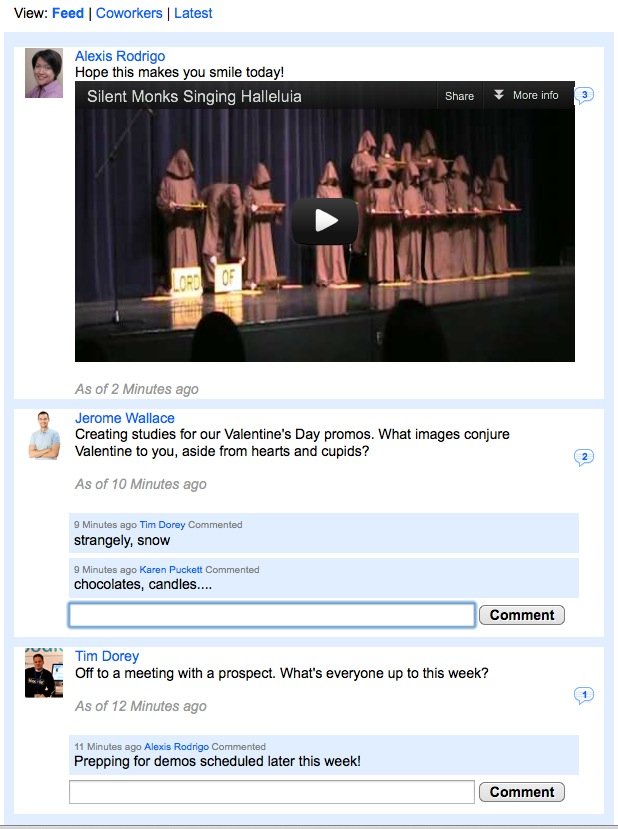 The ability to comment on updates can lead to some interesting “conversations” — some of which can lead to collaborations outside of the activity stream. Being able to embed hyperlinks, photos, videos and other media also makes the updates more information-rich, interesting and compelling.

Some companies have a rating function in their activity stream, similar to Facebook’s “like” button. This can be useful, but it can also lead to fewer people actually commenting on a status, because they feel that “liking” or giving it a thumbs up is enough.

How about you? Could your workplace use more ambient awareness? How are you currently achieving this? Or what can you do to encourage it more?